The History of ADRI

On 26 May 2004 Dr Peter Shergold AM, Secretary, Department of the Prime Minister and Cabinet launched the Australasian Digital Recordkeeping Initiative. He was speaking at the ‘The Business e-Volution of Government’ conference hosted by the Institute of Public Administration Australia (IPAA) ACT Division and the Australian Government Information Management Office. Read Dr Shergold’s paper, Digital Amnesia: The Danger in Forgetting the Future, on the Department of the Prime Minister and Cabinet website.

The Initiative promotes a single Australasian approach to digital public recordkeeping across all jurisdictions and provides a space for communication and information sharing between the members. The collaboration ensures the best possible strategic use of limited collective resources and maximises the wider awareness and impact of the agreed approach to addressing the challenge of digital records.

The collaboration builds on and acknowledges many years of Australasian collaboration in the development of concepts, tools, standards and strategies for good recordkeeping. The Initiative’s approach will add value to existing jurisdiction-specific initiatives.

Representatives of ADRI member institutions in Canberra for the first plenary meeting of ADRI, 8 March 2004 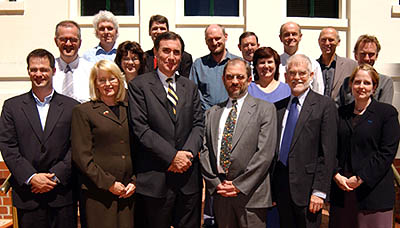